I booked an adventure holiday with Ron Boulton of Global Motorbike Tours, who has years of experience of motorbike tours of Southern India and the Himalayas.

I signed up for the South India tour and what an adventure that turned out to be. From arid plains to breathtakingly beautiful tea plantations in the high mountains there were sights and experiences at every turn.

If you’re looking for a “holiday”, give Thomas Cook a ring. If you want the adventure of a lifetime, you’ve come to the right place. 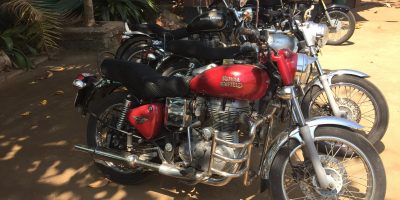 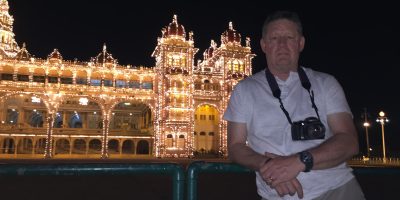 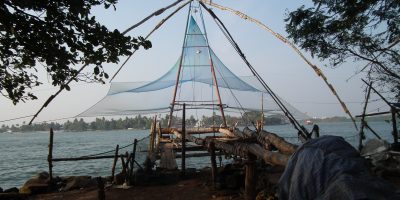 Today is a day of riding as we arrived in the middle of the night. After a short nap, Ron had arranged for us to explore the city. Firstly taking a creaky old ferry to the island of Fort Kochi with its local traders trying to sell us things that we did not need,  followed by a visit to the Chinese fishing nets, and a lovely lunch at the spice shop café. Then a taxi to the Royal Enfield shop to buy some goodies which are about 50% cheaper than you would pay in the UK. Back to the hotel where much to our delight, Ron had arranged for the bikes, Royal Enfield 350cc bullets, to be delivered a day early.

First, ride on the bikes today. The traffic is as insane as I remember it. We went to Cherai beach for a test ride and went for a swim in the Arabian Sea followed by lunch in a beachside restaurant.  Lost a couple of riders on the way back but we re-grouped and all is well everyone is back safe and sound.

Off to Kumarakom tomorrow.

Today is a short ride.  Another insane ride out of the busy district of Ernakuluam to the more peaceful backwaters of Kumarakom. The picture is the view from my room.

Off to Munnar tomorrow, tea plantations in the mountains. Someone has to! 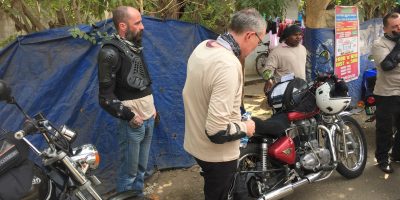 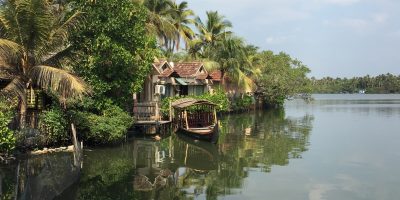 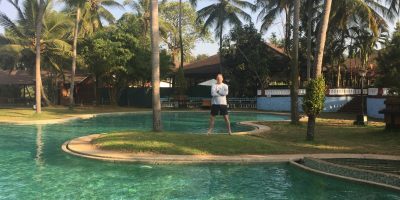 What a day. What a lovely day!  So much happened on the way to Munnar.

First, we pulled over for a break when a guy on a motorbike stopped and asked what we were up to. It turned out he was from BBC World service and did an interview with our glorious leader Ron Boulton of Global Motorbike Tours

We came across the letters DYFI written in the road. We’ve seen this many times. It seems to be the Democratic Youth Federation of India who uses the iconic picture of Che Guevara as their logo.

After a long ride of over 160 miles, we are in Munnar which is in high Tea country at over 5000 feet so is much cooler and very welcome. We are all safe and sound due more to the locals avoiding us rather than our own riding skills. There have been quite a few hairy moments.

Off to Coonoor tomorrow and another epic day.

And there was a cow or two in a pickup!

One last thing – we have complimentary slippers in the hotel room. That’s Christmas sorted for Mrs. Swan then!

It was bitterly cold setting off at 7 am but it soon warmed up as we rode through the stunningly beautiful tea plantations.

We met a few monkeys and crocodiles on the way as you do!

One constant is the number of stray dogs we see and they are all so cute, it’s difficult not to want to take them home. Mrs. S would be in tears.

Just before the bonkers ascent to Coonoor (6000 feet), we met an incredible ice cream man. Please check out his horn in the photo. Yes, it is an empty bottle of sprite.

On arriving at the hotel ready for a refreshing cold beer or two, we were informed that it was a dry day, so no alcohol can be served in the entire state of Tamil Nadu. You can imagine how we took that news……..

Off to dinner now and an early night ready for a 4 am start tomorrow. Something to do with a railway…….. 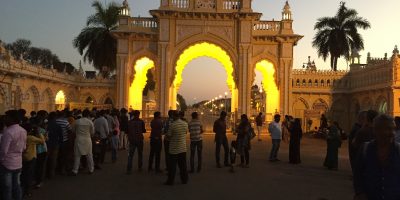 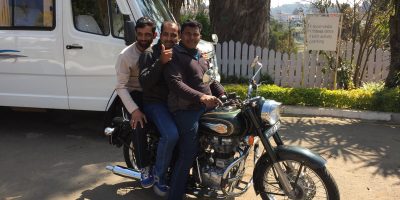 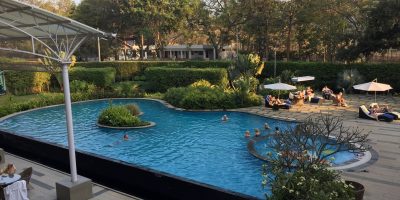 Popularly referred to as Ooty, this gem among southern hill resorts is covered in eucalyptus and pine trees and coffee and tea plantations.

Up at 4 am and off for a 1-hour descent to the station at Mettupalayam.

The idea is to ride the incredibly old narrow gauge steam train back to where we started 1 hour ago. It sounds bonkers but it’s what we bikers do.

The ascent was amazing and we met some incredibly nice people on the train who couldn’t wait to share their food with us. The people here are truly beautiful.

A short ride to Ooty and then a much-needed downtime session in a local bar. Now bear in mind we couldn’t drink yesterday we had to make up for lost time!

A 32 hairpin descent out of Ooty was our start for today. How can you top that? Surely it’s downhill from here. Pardon the pun.  Well, I’ll tell you how you top that. You take a wrong turn and come upon a school just ready to turn out for the day. Yes, they go to school on Saturday.

A little backstory. We were advised to take pens and pencils etc for this eventuality. I’m not sure what your experience of children abroad is, probably taught to beg, but here all children want is a pen. Plain and simple. A pen is a way out of poverty because it means education. We spoke to the headmaster and he was happy for us to dish out the keys to a chance for a better life.

The children are immaculately turned out no matter where they come from whether it’s a reed hut or a tin shack or rough brick house.

It was truly a moving experience. You would have to be made of stone not to be moved by the look on their faces as we handed out something as simple as a pen. Some of us cried and the rest of us lied.

We are now in the lap of luxury and I mean luxury in the Radison Blu in Mysor and I can’t help feeling a little guilty.

Meet one of the riders. 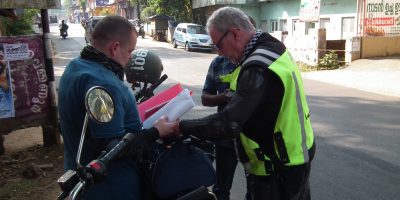 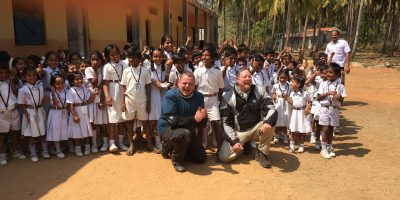 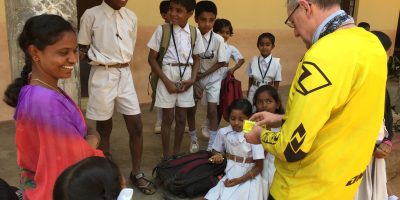 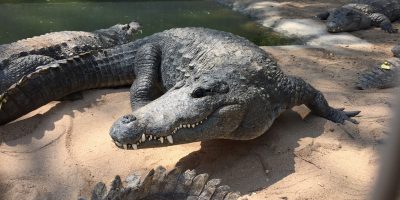 Day off in Mysore.

After a much-needed lie in, we got a couple of tuk-tuks into the city center. A tuk-tuk is a motorized development of the traditional pulled rickshaw or cycle rickshaw, and are the main source of transport around villages towns and cities. They really do turn on a sixpence and the drivers are skillful, and brave in equal measure. They pretend to know where you want to go to get you inside and then immediately stop and ask an English speaking friend to find out where to drop you for quite literally pennies or should I say Rupees.

We toured the local market and were very quickly spotted by a couple of enterprising young fellows who were convinced we needed to buy the usual tourist stuff. We shook them off a couple of hours later, after having bought stuff we didn’t want. Locals 1 us 0.

Every Sunday night the Maharajah lights up his palace. It truly is a spectacular site.

John has put up with me on many bonkers motorcycle adventures over the years so really does deserve a medal. He is the most reliable of people and is as solid as a rock. He puts up with my snoring and Basil moments. A bit like Mrs. S really. Without the curvy bits or the cake making skills. I think………..

Today was all about memories for me.

This whole India thing started in 2004. I watched a documentary on the Men and Motors channel on Sky TV all about a motorbike rally in southern India on behalf of a number of charities in both India and England. You had to raise a not inconsiderable amount of money to take part. It was absolutely right up my street so I decided to give it a whirl.

I was lucky enough to do just that with the help of family and friends and Enduro India in February 2005 happened. I met some amazing people who I still keep in touch with today.

Ron Boulton is one of them. More about him tomorrow, but for today check out the picture of both of us with the Matching t-shirts from 12 years ago. The t-shirts and Ron have aged a little better than me.

Today we arrived at the Kadavu resort where we started and ended out the amazing journey in 2005.

We had a ride to the local town on a bus. Check out the picture of the wheel.

The crew is the stars of this trip.

Saju, Joseph, and Lijo. They drive the support truck following us everywhere. We stop they stop. Out they jump with cold water. We take a wrong turn; they chase us and put us back on track. One of us doesn’t ride today; one of them rides the bike to the next destination. A bike breaks down; they fix within minutes, sometimes seconds. Fixers, interpreters, all round good guys. The burgers won’t stop smiling. How can anyone be this happy?

They live in India! 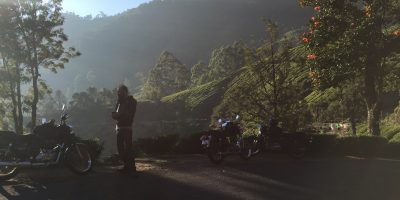 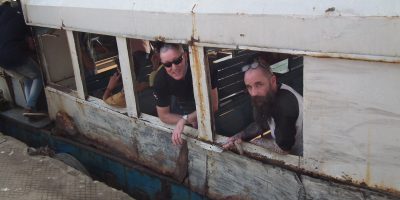 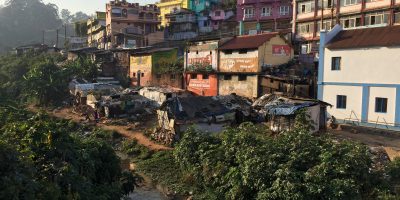 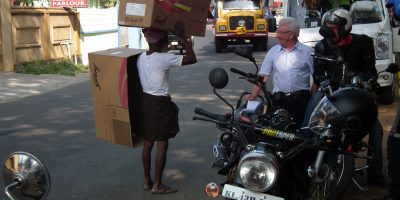 The final run. A long hot day riding through lots of towns and villages. Not particularly pretty but we need to be at the beach resort ready for the final hop to the airport on Wednesday afternoon.

The day was punctuated with a stop off at an elephant sanctuary for retired working elephants. Even though they are in the twilight of their lives they are still chained to trees. It’s a tough site but what on earth do you do with them? They wouldn’t survive in the wild and you can’t just let them wander around. Heartbreaking to see these most majestic of animals in this state. Photography of all kinds was not allowed in the reserve, but of course, we knew best. Two of us had our cameras confiscated by an over an officious security guard. Like the wimp I am I handed over the camera immediately but John Metcalfe would not go quietly and ended up in a right tussle with the guard. I had visions of an Indian jail. After much pleading and apologizing they let us and our cameras go on our way. A funny but quite scary incident.

This part of India has very few road signs and the roads certainly aren’t named. We get around using “Rally Tulips”. The name of this type of navigation comes from the Tulip Rally, which first used it in the 1950s.

We had our final dinner together with the team. As a memento, Ron had some number plates made up with our bike registrations. A nice touch.

Well done Ron and team for giving us a wonderful adventure.

The great leader or “Coffee boss” as the crew calls him. This is his 36th trip to India so he knows how to get things done. He is a blunt-speaking Mancunian who has lived in the northeast since 1980.