Join us and ride the worlds highest passes on this epic adventure of a lifetime. Touring through the Himalayan Mountains provides breathtaking views around every corner, unique cultural experiences with the amazingly friendly locals and motorbike riding to dream of.

Global Motorbike Tours will take you through sunny pine forests, snow-capped mountains, and red rocky landscapes, experience vistas that are out of this world.

This motorbike tour isn’t about racing around mountain roads, it’s about cruising through the hills with a group of like-minded riders and taking in the incredible surroundings of the beautiful Himalayan Mountains. Sitting aboard your thumping motorbike is the only way to travel India’s mountain roads as you pass beneath cascading waterfalls, alongside fast flowing rivers and lush valleys. 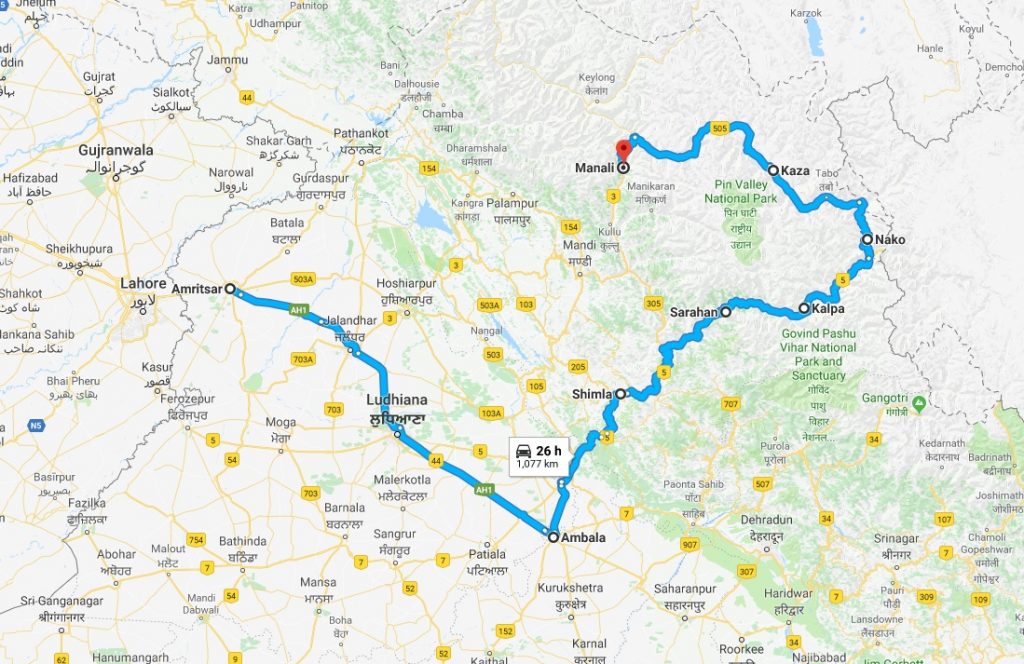 Amritsar – Founded in 1577 by the fourth Sikh guru, Ram Das, Amritsar is home to Sikhism’s holiest shrine, the spectacular Golden Temple, one of India’s most serene and humbling sights. The same cannot be said for the hyperactive streets surrounding the temple.  Amritsar is divided in two by a tangle of railway lines. The old city, containing the Golden Temple and other historic sights and bound by 12 medieval gates, is southeast of the railway lines. This is a fascinating area to explore, with a capillary network of narrow bazaars that seems to float between the centuries.
Ambala – There are several beliefs regarding the name of the city of Ambala. Some of the historians said that the city got its name from Amba Rajput who actually founded it in the 14th century. Another version suggests that the region has taken the name after Goddess BhawaniAmba and a temple is also there in the city. Some people claim that city was originally named ‘Ambwala’, means mango village which later on corrupted as Ambala.

Shimla – The former summer capital of the British in India and the present capital of Himachal Pradesh, Shimla has been blessed with all the natural bounties which one can think of. It has got a scenic location, it is surrounded by green hills with snow-capped peaks. The spectacular cool hills accompanied by the structures made during the colonial era creates an aura which is very different from other hills.  Bulging at its seams with unprecedented expansion, Shimla is ideally located, and though there is an air service to the town, it is best reached by the road that takes in the charms of the Himalayan countryside at its best. There is a sense of nostalgia about Shimla, with its old bungalows and their gabled roofs and beautiful gardens.
Sarahan – The former summer capital of the Bushahr kingdom, Sarahan is dominated by the fabulous Bhimakali Temple, built in the traditional Kinnauri manner from layers of stone and timber to absorb the force of earthquakes. There are two towers here, one recently rebuilt after the 12th-century original collapsed, and one from the 1920s containing a highly revered shrine to Bhimakali (the local version of Kali) beneath a beautiful silver-filigree canopy on its top floor. The curved, peaked roofs suggest the Tibetan influence on Kinnauri architecture, which becomes more marked as you move up the valley.

Kalpa is a small town in the Sutlej river valley, above Recong Peo in the Kinnaur district of Himachal Pradesh, Northern India, in the Indian Himalaya. Inhabited by Kinnauri people and famous for its apple orchards. Apples are a major cash-crop for the region. The local inhabitants follow a syncretism of Hinduism and Buddhism, and many temples in Kalpa are dedicated to both Hindu and Buddhist gods and goddesses.
Nako – The unspoiled, serene and picturesque village of Nako is located in Kinnaur District of Himachal Pradesh at a height of around 3600m. Nako is found at the east end of Kinnaur Valley and can be called almost the last attraction on the way to Malling Nullah. Malling Nullah is located in between Kinnaur and Spiti Valley and one of the most happening travel destinations of Himachal Pradesh. As the village is very small in its area, one can easily explore the hidden gems of this village on foot. The major attraction of Nako Village is the Nako Lake which is located amidst extremely hilly terrains. Close to this lake one can get to see four Buddhist monasteries and a huge footlike impression.

Kaza – Rudyard Kipling described the Lahaul and Spiti region as ‘a world within a world’. And situated about 11,980 feet above sea level, it really is just that.  Its mountainous terrain and pristine locales attract visitors who want to indulge in adventurous activities and spiritual well being alike. It is the base camp for trekking, mountaineering, and other adventures. Pin-Parvati, Parang-La, and Pin-Bhaba are some of the popular trails which start from Kaza. A gentle stroll to villages around Kaza can also be an interesting experience.
Manali – Surrounded by high peaks in the beautiful green valley of the Beas River, with mountain adventures beckoning from all directions, Manali is a year-round magnet. Backpackers come to hang out in the hippie villages around the main town; adventurers come for trekking, climbing, mountain biking, canyoning, paragliding, rafting and skiing; and Indian families and honeymooners come for the cool mountain air and a taste of snow on a day trip to the Rohtang La. Manali is also the main jumping-off point (between June and October) for Ladakh and Spiti. It makes sense to unwind and feed up here for a few days while organizing your trip into the mountains.